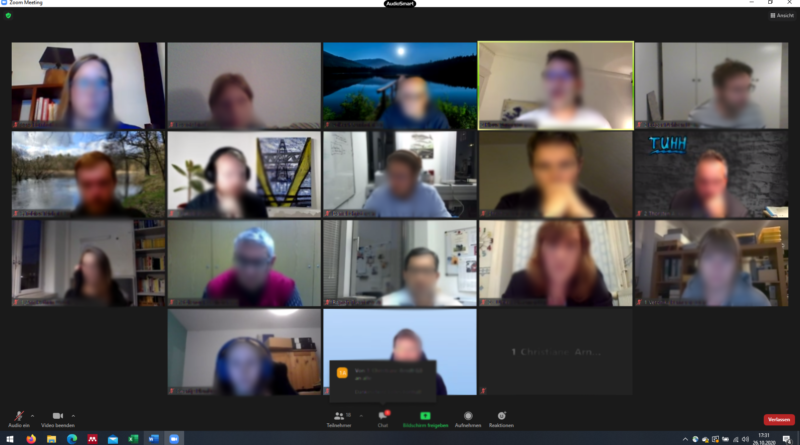 What was it about?

The round table was moderated by Dr Klaus Vosgerau with Dr Sara Bornhöft, Dr Ulrike Bulmann and Dr Dorothea Ellinger (all ZLL).

What is the empirical evidence on the digital semester?

Dr Sara Bornhöft first presented key findings from surveys of teachers and students on the digital summer semester in a keynote speech. The surveys conducted by ZLL and ITBH showed that the changeover had been successful across the board, but that interaction with students proved difficult in some cases. Too little feedback was given by the students and the students’ cameras were often not switched on. There were also difficulties in selecting and using the right tools for teaching. There were also fears that students might perform less well and that the summer semester would lead to them extending or dropping out of their studies.

It was seen as positive that consultation hours were used more intensively and that learning is now possible independent of time and place. The students in particular would like to see improved communication between students and teachers, as well as the retention of certain newly implemented tools.

At the same time, the teachers named ideas for solutions. These include that there should be technical support and technical guides teachers students. It was also reported that students would adopt the learning material more actively if a regular reminder rhythm was introduced.

In general, interactivity and opportunities for feedback should be significantly expanded from the point of view of the teachers. It was then discussed that all courses could be run as live streams only, without offering additional recordings for asynchronous learning. However, it was critically noted that this could lead to negative competition for students between courses and subjects, which would be fuelled by a race to find the most appealing teaching technology.

The discussion also addressed the digital implementation of practicals and experiments in digital teaching. In an exemplary project, cooperation between students in carrying out experiments was promoted by requiring the project results to be presented by the groups in synchronous online teaching time for all participants. At the same time, feedback was requested from other students. This strengthened both the digital exchange between the students and the teaching success, as all projects were successfully completed by the students in a hybrid way).

What are the expectations for winter? – Three sessions

If three specific points are to be further improved or supplemented in digital teaching – what should they be? First of all, about the systems available at the TUHH was mentioned, which should be linked to . At the same time, the have to work. For everything, there needs to be a of tools provided (too many different tools can overwhelm students).

With regard to the learners, however, the result focuses on these three points: 1. can buddy tandems be formed from first-semester students and students in higher semesters? 2. should all in a central place in a teaching management system (preferably Stud.IP). 3. strengthen student collaboration by organising (in formal and informal learning situations).

Session 02: “Five secret functions discovered in Stud.IP and ILIAS!” – Tips on the standard tools of the TUHH

How do you actually integrate videos well into ILIAS? In the past, it was not possible to upload videos easily and integrate them in a contemporary way. Now, however, the media upload can be done via the Mediasite server, videos can then be played directly in the . The is the TUHH’s central place for storing and providing streaming files for courses.

It was also explained that courses in Stud.IP with their created contents can be copied as new courses for a new semester (if required, the RZ provides support).

Basically, it became clear in this session that the application experience with ILIAS in particular – even among interested teachers – is very different.

Session 03: “How do I know it’s going?” – Three tools for interim feedback

Three feedback methods were presented in this group: TAPdigital, digital survey tools and smaller methods for feedback on individual meetings. It was discussed at which point in the event sales process feedback should most usefully be sought.

As a summing-up headline, it was formulated at the TUHH at the end of the summer semester that “so far it seems to have gone better[scheint] than one could have originally expected”.

In the discussion of the round table, the motivation and activation of students in synchronous as well as in asynchronous teaching has been a central concern of the teachers. The simultaneous introduction of TUNE was named as a difficult framework condition, which makes semester preparation more difficult. Finally, the very good exchange between the institutes and hierarchical levels on previous results and new plans for digital teaching and learning was emphasised.

As a future need, more orientation on digital teaching through a guide to action and “good examples” was desired. In detail, this applies, for example, to questions of integrating media in ILIAS. Since all institutes continue to face similar challenges, the desire for more round tables with more opportunity for discussion was emphasised.

The colleagues in the ZLL as well as in the computer centre will be happy to answer didactic or technical questions.