The numerical modeling of multi-scale structural problems with heterogeneities is a numerically demanding task. The difficulty lies in the existence of size-dependent phenomena requiring an appropriate solution. The fact that problems of this nature usually feature a complex geometry, which calls for the generation of complex mesh models, is an additional complication. There are various techniques for circumventing the difficulties posed by multi-scale simulation, such as the Generalized Finite Element Method (GFEM), the eXtended Finite Element Method (XFEM) or the Meshless Methods (MM). For this particular project we chose to employ the recently proposed Finite Cell Method (FCM), which is a combination of the high-order finite element method (p-FEM) coupled with a fictitious domain approach.

The FCM has an inherent capacity for facilitating the handling of linear and non-linear problems connected with complex geometry and it is a promising method for many intricate applications. Despite the significant success of the method, however, the FCM is still in the developing stages and needs to be improved on several levels. In the case of multi-material modeling, for instance, where the solution features a loss of regularity along the material interface, the FCM exhibits oscillatory results particularly in the derivatives. Besides, the loss of regularity hinders optimal convergence. A simple, yet effective remedy is to enrich the finite element space with an appropriate enrichment term designed to represent the weak discontinuity at the material interface. This enrichment can be provided either by choosing the pre-known functions that can describe the special phenomenon in the domain of interest or by a local h-, p- or hp-extension. Irrespective to the type of enrichment, it can be added to the FE space by means of the hp-d method which places the enrichment terms on a superimposed mesh, the so- called overlay mesh. Figure 1 schematically demonstrates the main idea behind this approach. This method of enrichment complies effectively with both the FCM framework and the multi-scale simulation. 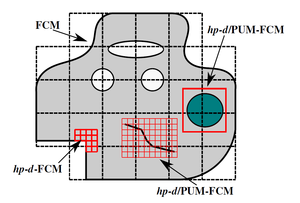 Figure 1: FCM with the local enrichment using the hp-d method