Thanks to its versatility, the Finite Element Method (FEM) has become the most frequently applied numerical method in Computational Mechanics. Although the FEM is in a mature state there are still problems where its application is difficult. These problems arise, for example, when considering heterogeneous materials or more generally when discretizing structures which have a very complex geometry which might even change during the computation. In such cases mesh generation can become very involved. To overcome these problems we propose to apply the Finite Cell Method (FCM) which can be considered as a combination of a fictitious domain method with high-order finite elements. The main idea is to embed the physical domain into an extended domain which can be easily discretized with a structured mesh consisting of finite cells. In this way, mesh generation is dramatically simplified and the burden is shifted towards the integration of the stiffness matrices. However, the integration can be performed adaptively in a fully automatic way. During the integration the geometry and varying material properties are taken into account while the discretization error is controlled by adjusting the polynomial degree of the cells. To illustrate the basic idea, Figure 1 shows a perforated square plate which is discretized by four cells. Note that the geometry of the circular hole is taking into account during the integration of the stiffness matrices. When performing a p-extension, the error in energy norm decreases exponentially, yielding a very efficient discretization. 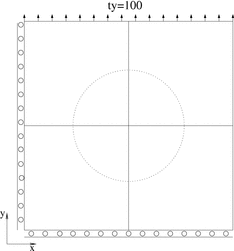 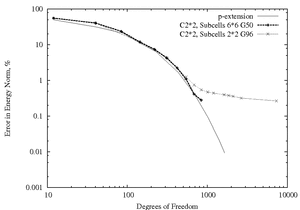 Figure 1. Error in the energy norm for a perforated plate .

The joint research project of the above mentioned partners is funded by the Alexander von Humboldt Foundation in the framework of the alumni/research group linkage programm.
Period of funding: July 2010 – September 2014