In many fluid-structure interaction (FSI) simulations performed in Naval Architecture and Ocean Engineering, the structure is considered to be rigid. Although the assumption of a rigid body is justified in many cases, there are several problems where the deformation of the structure needs to be taken into account. Problems of this type are, for example:

In order to model and simulate these problems accurately, a full coupling of a fluid and a structural solver needs to be considered. Therefore, in a first approach a FSI simulation tool [1] has been realized based on the opensource fluid solver OpenFOAM [2] which uses the finite volume method. In this approach, the structure has been discretized by means of the finite element methods and the corresponding equation of motion has been solved in OpenFOAM utilizing the Newmark method for time integration. The needed mass and stiffness matrices have been obtained from the commercial finite element code ANSYS [3]. A sloshing simulation of a tank has been performed with this FSI tool and the influence of the deformation of the tank due to the fluid loads has been studied. Figure 1 shows the pressure for two different points at the top of the tank. From this it is evident, that the pressure is significantly smaller when taking the deformation of the tank into account. This can be explained by the fact, that part of the kinetic energy of the fluid is transformed into the deformation of the tank. 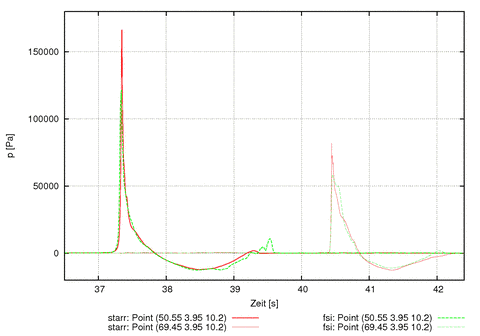 One period of the simulation is visualized in the animation. The interface between fluid and gas is shown in grey and the tank walls are colored according to the magnitude of their deformation. The arrows illustrate the deformation in the cutting plane, demonstrating how the tank walls react to the pressure of the fluid.

Outline of the Project:

The aim of this project is to develop a FSI-solver capable of simulating different FSI-problems such as described above. Therefore the fluid solver OpenFOAM will be coupled with the inhouse finite element code AdhoC4 to be able to simulate FSI problems arising in Naval Architecture and Ocean Engineering.