The welding of block joints in shipbuilding often creates much effort as the fabrication without margins leads sometimes to large gaps between them. Unfavourable may be high stresses which can occur due to constraints. For this reason a project was performed to investigate if butt joints welded with larger gaps fulfil the requirements. The objective was the proof of a sufficient strength of welds performed with gaps of up to 30 mm. For this purpose, butt joints at 250 mm wide and 15 mm thick plates made of mild and higher-tensile steel, welded with different gaps, were investigated with respect to their fracture toughness and fatigue strength. Apart from the width of the gap, further parameters were varied, among others the welding method (string-bead, weaving technique, Fig. 1).

The welding was performed under definite constraints corresponding to the stiffness of the surrounding ship structure. For this purpose a restraining welding set-up was designed. The arrangement as a closed system is able to realize unfavourable constraints (Fig. 2). 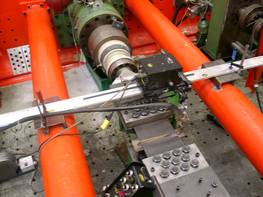 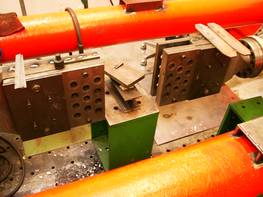 Within the main part, crack resistance curves (CTOD) were determined for several variants using small-scale specimens. The verification was performed with the FITNET procedure (options 1, 2 and 3) using the obtained fracture toughness parameters from the small-scale specimens. For a comparison of the critical stresses and associated crack lengths, equivalent measurements of the maximum load carried by a 250 mm butt weld with a definite defect, considered as original component, were performed. From the fracture mechanics point of view, no objections exist regarding the large air-gap of 30 mm welded by weaving. The tensile tests as well as the FITNET procedure even showed a positive effect of the large gap with regard to the material properties of the weld metal. However, the results for the string-bead technique is critical with respect to the CTOD values as well as to the critical crack lengths. Generally it can be stated that the FITNET assessment shows a quite good agreement with the test results and can evaluate effects of the welding method on the safety against fracture.

The fatigue tests confirm the results of FITNET regarding the weaving-technique. Despite of a small decrease of the fatigue strength, the weaving-technique belongs to the existing fatigue class. As expected the reaction forces showed an appreciable influence on the fatigue strength, which is considered by increasing the stress-ratio R. Welding by the string-bead technique however leads to a relatively low fatigue class for the local approaches. Furthermore material effects or effects of the local weld geometry as well as unfavourable residual stresses resulted to cracks at unexpected location for that welding technique.

Generally the fatigue as well as the fracture investigations indicated a clear influence of welding technique on the fatigue and fracture strength of a weld.

Furthermore numerical simulations were done, which should reflect the influences of the incrased heat input during welding with the weaving technique. For this reason a plate of steel grade D36 was modeled with a 30 mm wide gap with the finite element program ANSYS. This is a multi-layer weld, that is why the calculation time is enormous and has to be reduced by a minimized number of elements. Fig. 3 shows the model including the path of the heat source (left) and the vertical deformation of the plate after cooling (right).

Every single step of the experimentel procedure was simulated and the afterward comparison achieved a good accordance.

Fricke, W. und Zacke, S.: Numerical Analysis of Residual Stresses and their Influence on the Fatigue Strength at Block Joints of Ships. Proc. of the 64th Int. Conf. of the International Institute of Welding, 21st & 22nd July 2011. Chennai, 2011.